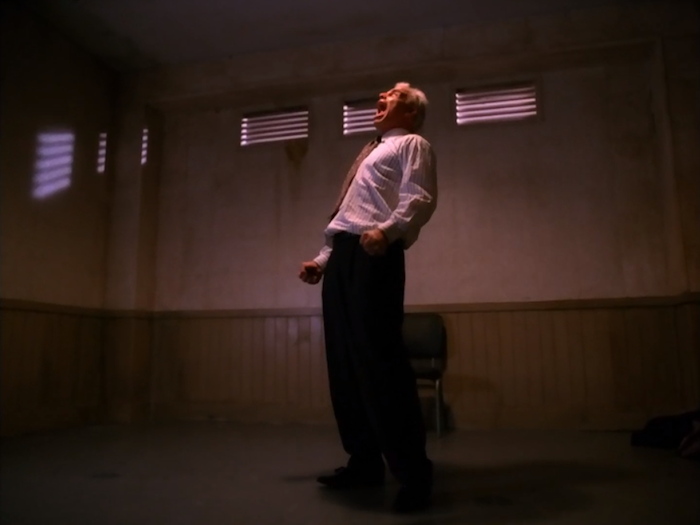 This episode is a roller coaster, but not in a good way. It careens back and forth from good moments to terrible ones.
It has a certain urgency, because it was apparently decided the Laura Palmer story should be wrapped up so the show could move on. Scenes end with a character going somewhere, and the next scene is them arriving. I’d actually forgotten there were a few scenes in here not related to Cooper solving the crime. But this approach also makes the proceedings feel rushed. 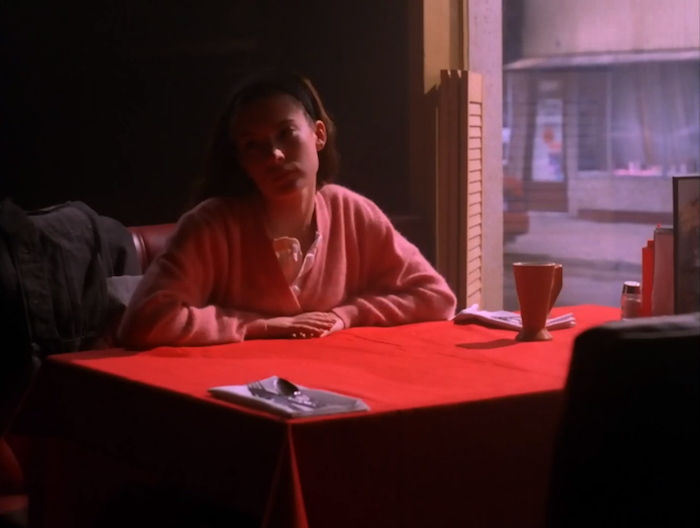 Scenes like Donna and James’ restaurant meeting have an empty, lifeless feeling to them, like the town’s been abandoned except for whoever is on screen. The backgrounds are too quiet. Maybe director Tim Hunter wasn’t a good fit for the material. He did much better in his season one effort. This episode sorely needed David Lynch. He could’ve given that Road House scene the requisite atmosphere of mystery. Instead, it lands with a thud, as do other mystical aspects of the investigation. The chewing of gum is incorporated in a painfully artificial manner, linking up in a completely meaningless way to Cooper’s dream. (Not to mention that trying to explain the dream is the antithesis of the Lynch style.) The episode ends with another corny appearance by an owl. Even Al Strobel, usually reliably unhinged as Mike, goes over the top here.
I found myself asking a few too many logic questions. What was Catherine’s plan? She didn’t know Ben would get arrested and need her help. Will Josie have trouble cashing that five million dollar cheque? Why does Donna wear her sunglasses inside the Palmer home, except as a plot necessity? Why doesn’t she leave when the doorbell rings, after Leland/BOB’s sudden forceful hug? Why does James, so committed to Donna at the beginning of the episode, have to dump her when he finds out Maddy died? Why does BOB not see the Giant when he appears to Cooper, or at least sense some of the hoodoo that’s going on?
The script features a few howlers. James, about his motorcycle: “God, the engine sounded like a thousand people singing.” The elderly room service man actually tells Cooper at one point that he’s “getting warmer now”. And making a joke out of Dick’s name? Never gets old. Originally, I bristled at Cooper telling the dying Leland to go “into the light”, because it’s a cliché, but it turns out Cooper’s speech comes straight out of The Tibetan Book of the Dead. (Though even the source doesn’t put so much emphasis on the light.)
I have mixed feelings about that scene. The script has Leland seeing “the light”, and Laura, which is corny as hell. But it has some power because Kyle MacLachlan and Ray Wise give moving performances. The sprinklers dousing them throughout the scene was a nice atmospheric touch. 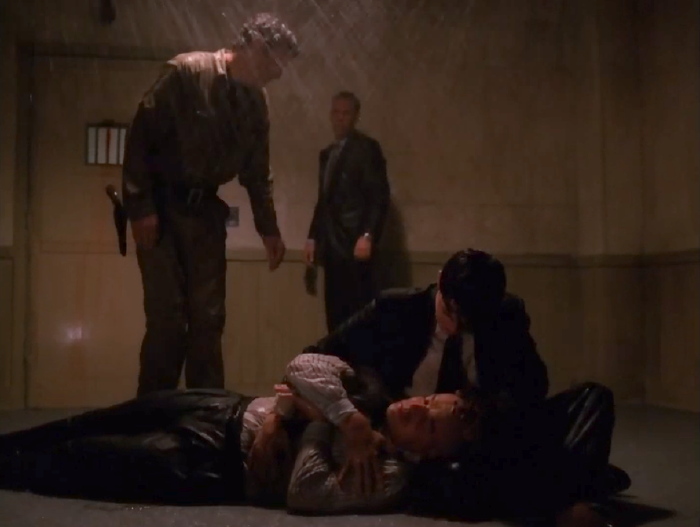 In the end, it’s disappointing that Cooper doesn’t really solve the crime. I would have preferred his discovery of the culprit to be due to his instincts and investigative prowess, instead of merely having to remember what Laura whispered to him in his dream.

Cooper: “Leland, the time has come for you to seek the path. Your soul has set you face-to-face with the clear light, and you are now about to experience it in all its reality, wherein all things are like the void and cloudless sky, and the naked, spotless intellect is like a transparent vacuum, without circumference or center. Leland, in this moment, know yourself, and abide in that state… Look to the light, Leland. Find the light.”

Book: “O, nobly-born [person’s name], the time hath now come for thee to seek the Path [in reality]. Thy breathing is about to cease. Thy guru hath set thee face to face before with the Clear Light; and now thou art about to experience in its Reality in the Bardo state, wherein all things are like the void and cloudless sky, and the naked, spotless intellect is like unto a transparent vacuum without circumference or centre. At this moment, know thou thyself, and abide in that state.”