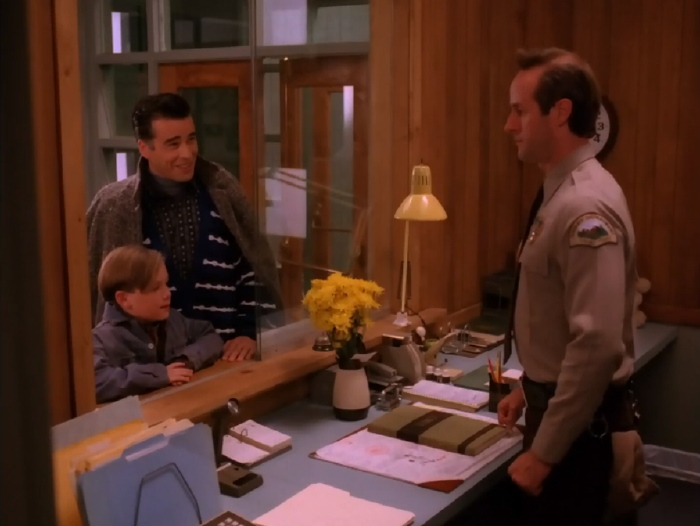 This is a reasonably compelling episode. That’s high praise for the dark ages of Twin Peaks (aka episodes 15 to 24). It’s a good sign that there are two Nadine scenes here, and I cringed at neither.
Cooper gets more information about the White Lodge from Hawk and Harry, and it’s intriguing stuff. Hawk says of the Black Lodge, “There you will meet your shadow self.” I also liked Cooper’s zen attitude about the investigation of his actions: “These are things I cannot control.” Many other scenes throughout the episode are written and directed in an engaging manner. 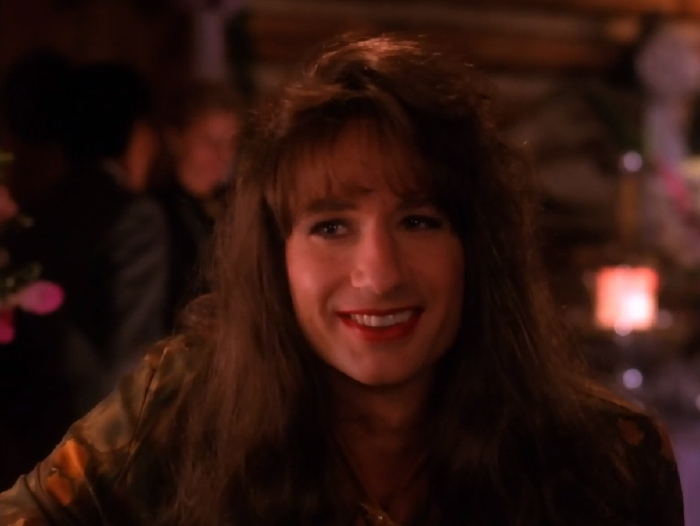 The best part of the episode is the introduction of Denise, an FBI colleague of Dale’s who previously went by “Dennis”. It’s a pleasant surprise to see a transvestite (and possible transsexual) person portrayed in such an unself-conscious way, especially in 1991. David Duchovny’s (pre-X-Files) performance is blessedly down-to-earth, and Agent Cooper reacts in an open and supportive way that befits his character.
But this is also an episode where someone who is not David Lynch is doing the voice of Gordon Cole, which only served to remind me that Lynch’s involvement with the show during this period was somewhere between minimal and none.
I criticized an earlier episode for introducing too many characters, most of which were uninteresting. There’s a touch of that in this episode. Here we get Evelyn, Nicky, Lana (the mayor’s brother’s bride), and Andrew. Plus appearances by other newish characters such as Ernie, Agent Hardy, and the mayor’s brother Doug. Nicky and Evelyn’s storylines are among the most loathed by fans of the show. Nicky’s scenes so far are supposed to be funny, at which they fail completely. Evelyn is clearly meant to be a femme fatale, but Annette McCarthy’s demeanor is stiff and unsexy. She’s aping the archetype instead of inhabiting it. The episode also pumps up James’ “brooding biker” mystique, with laughable results (see: his speech about riding his bike at night with the headlights off). 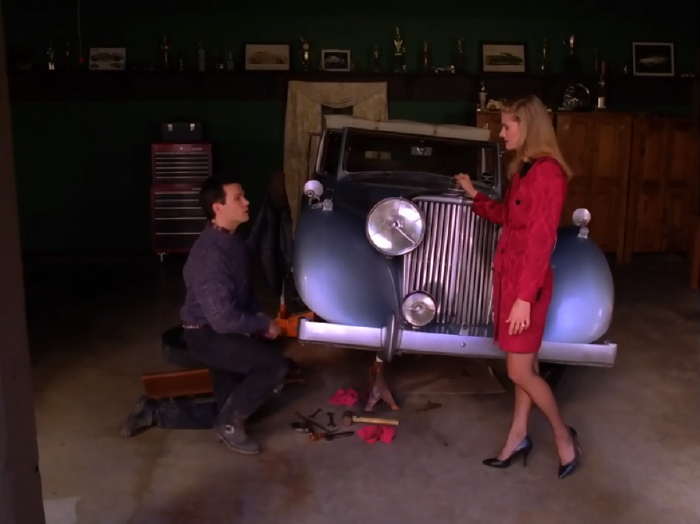 The episode ends with the revelation that Josie’s husband (and Catherine’s brother) Andrew is alive. It failed to make me gasp. And what the hell does he mean that “everything is going exactly as we planned”? They couldn’t possibly have predicted everything Josie has done that lead her to her current situation.