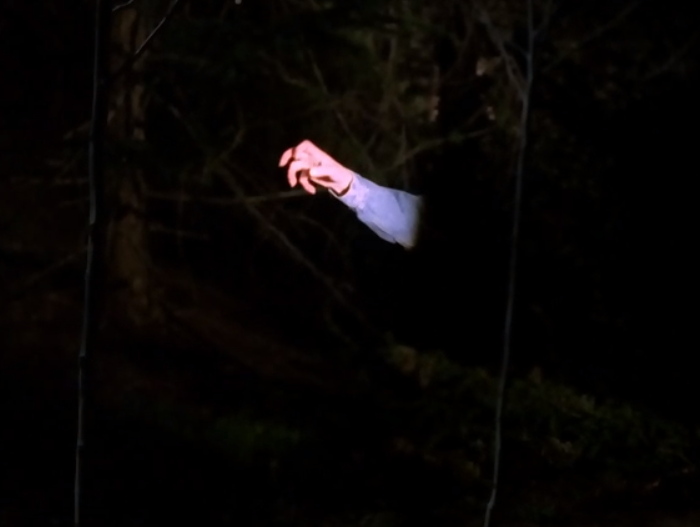 Donna finds records of her birth, which omit the name of the father. We find out Earle has been obsessed with the Black Lodge for a long time. Bobby acknowledges to Shelley that he’s been an asshole. Earle kidnaps the major and, with the help of truth serum, extracts some information from him. John Wheeler is called away to Brazil. Audrey races to the airport and the two make love before he departs. While Cooper dances with Annie, the Giant appears to him, mouthing the word “no”, a look of distress on his face. Earle figures out that the Owl Cave drawing is a map to the Black Lodge. In the woods, BOB emerges out of the dark.

One could look at this episode and say that it steals wholesale from David Lynch. But to me, it feels more like an appropriate use of his style that successfully recreates the uneasy mood that is his hallmark.
The episode doesn’t start off that promisingly. In the early going, some of Angelo Badalamenti’s more sinister themes are misused willy-nilly. And writers Harley Peyton and Robert Engels still have to contend with some of the less interesting ongoing plot lines, like Lana coercing the mayor into making sure she wins the pageant, as well as two examples of non-suspense: whether Ben is Donna’s father, and who Lucy will pick to father her child.
Elsewhere, the writers do a very good job. Again Annie’s dialogue gives her character dimension that makes her more than just Cooper’s object of affection. And it’s pretty funny when Leo, thinking he’s being clever, steals the shock collar control and only succeeds in shocking himself. The highlight for me was Windom’s mock fear: “I prithee. Have mercy, Leo.”
Very few of the show’s directors have succeeded as well as Stephen Gyllenhaal in matching the house style. There is the mysterious hand quaking that Cooper, Pete, and a lady at the diner experience. There is the surreal sight of Windom and Leo dressed in a horse costume. There is Leo and the major hollering while Windom puts together the last pieces of his Black Lodge puzzle in a frenzy. 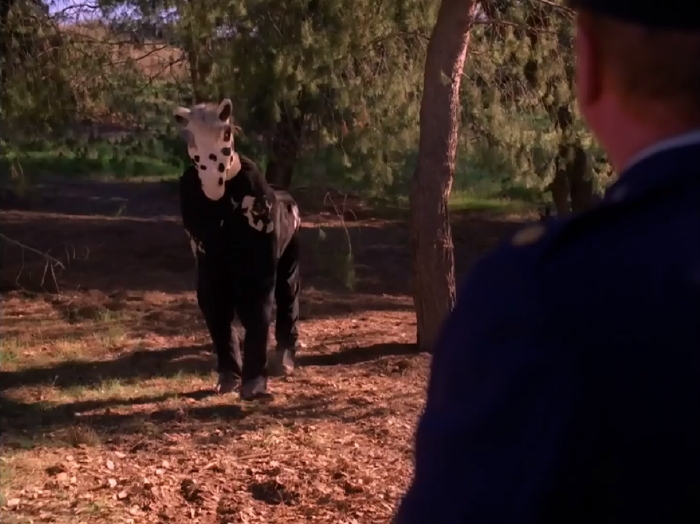 My favourite example here is the scene where Cooper visits Annie at the diner. When Annie says, “Something’s troubling you”, the camera begins to slowly move away from them, and Badalamenti’s keyboard gradually rises in volume, sounding an ominous note that continues to the end of the scene while the two lovebirds have an innocuous conversation. The contrast is textbook Lynch, and it works. The lengthy shot only ends when Cooper leans in for a kiss and we cut to a close-up. There is a loud crash. They look down and see that as they kissed, they knocked over some dirty plates. Cut to an extreme close-up of dripping coffee. 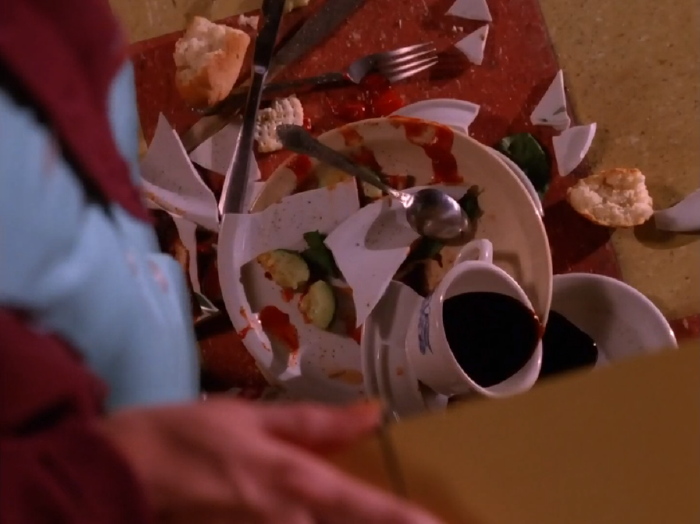 The second time the universe tries to warn Cooper to back away from Annie, for both their sakes, the Giant appears to him, waving his hands and mouthing the word “no”. As the mayor’s words (“This isn’t right. There’s something wrong here.”) echo, we switch to a montage of empty spaces: the Roadhouse parking lot, the stoplights, The Double R (closed for the night), the school hallways, the lobby of the Great Northern, the Sheriff’s waiting room (where a ringing phone is going unanswered). There is a sense of something big about to occur. Well done, Mr. Gyllenhaal. 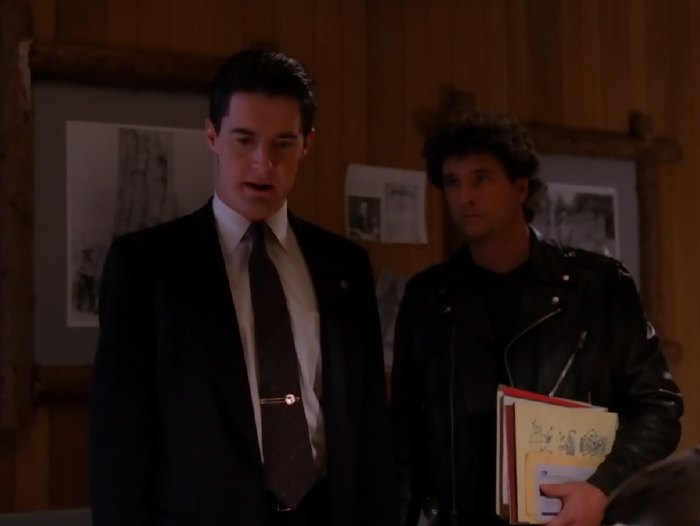