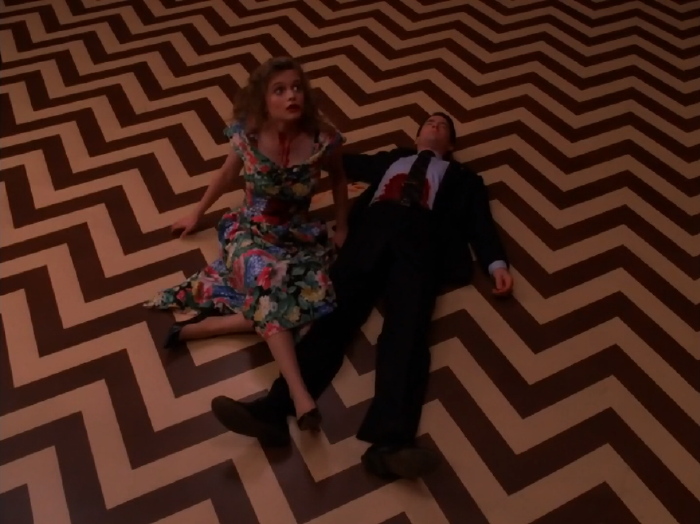 Lucy and Andy say “I love you”, apparently for the first time. Nadine returns to reality. Dr. Hayward arrives home to find Ben there. Will punches him; Ben hits his head and falls unconscious, possibly dead. Andrew figures out the key is a safety deposit key. Audrey handcuffs herself to the bank vault door as an act of civil disobedience. Andrew arrives with Pete. When they open the safety deposit box, a bomb goes off. Bobby asks Shelley to marry him. Windom takes Annie to the Black Lodge, and Cooper goes in after them. Sarah Palmer, channelling someone, tells the major, “I’m in the Black Lodge with Dale Cooper. I’m waiting for you.” Inside the Black Lodge, Cooper encounters various characters, including BOB, who takes Windom Earle’s soul. Eventually he sees his doppelgänger, and runs for the exit. Harry sees Dale and Annie on the forest floor, and comes to their aid. Later, Cooper, flanked by Harry and Dr. Hayward, awakens. Harry tells him Annie is recovering in the hospital. Cooper goes to the bathroom, where BOB is reflected back at him in the mirror. Cooper/BOB laugh maniacally.

David Lynch directed six Twin Peaks episodes. Though all of them bear his unmistakable mark, there is always some level of give and take to the demands of network television (often to the episodes’ benefit). This episode isn’t my favourite, but it’s definitely the one containing the highest concentration of Lynch. He knew the show had little chance of being renewed, so he did exactly what he wanted, rules be damned. He didn’t even adhere to the script credited to the show’s main writers, Mark Frost, Harley Peyton, and Robert Engels.
When people think about the last episode of Twin Peaks, they usually think of its last third. And who can blame them? It’s one of the weirdest eighteen minutes in television history, especially bold in 1991, when it first aired. But before we get to that, let’s deal with what precedes it. And what precedes it actually matches it in terms of emotion – it feels like a grey cloud hangs over the whole episode.
In the pilot there was sometimes a cold, alien quality to Cooper and the delight he took in his work. That pretty much vanished from the rest of the show’s run, resurfacing a bit when Lynch returned to the director’s chair. Lynch felt close to Cooper, and my bet is that he missed his version of the character and saw this as his last chance to have him portrayed his way. So that Cooper shows up here, but I wish Lynch had taken plot circumstances into account. Cooper smiles when Margaret speaks of “a gateway to an opening”, and it’s just wrong. Considering the urgency of the situation (the possible repercussions of Earle accessing the Black Lodge) and the fact that the woman he loves is in mortal peril, Cooper would not be in any condition to feel his usual delight in intriguing mysteries. 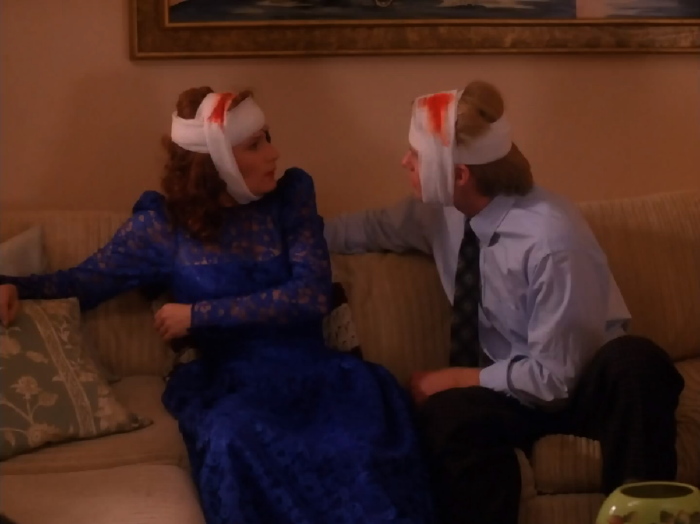 That’s not the only moment that feels like Lynch course-correcting the show, but the other instances work much better. Nadine going from cartoon character to harsh reality feels like a bracing slap in the face. When she returns to her previous self, she breaks four hearts at once – Ed’s, Norma’s, Mike’s, and her own. Her sobbing is poignant for the viewer, too.
Aside from the central plot, there are really only two attempts to create cliffhangers. The bank explosion is effective in that goal. More shocking to me, though, was the scene at the Haywards’. The appearance of Ben’s wife provides its own shock, because she hasn’t been seen since the middle of the first season. Donna crying, “You’re my daddy, you’re my daddy!” to her father is heartbreaking. And it triggers Dr. Hayward to behave in a most un-Dr. Hayward fashion, punching Ben, who reels, hits his head on the fireplace, and falls unconscious. Punctuating the shock, Will falls to his knees with a guttural cry. It’s a powerful climax to a subplot that has been rather weak up to this point. 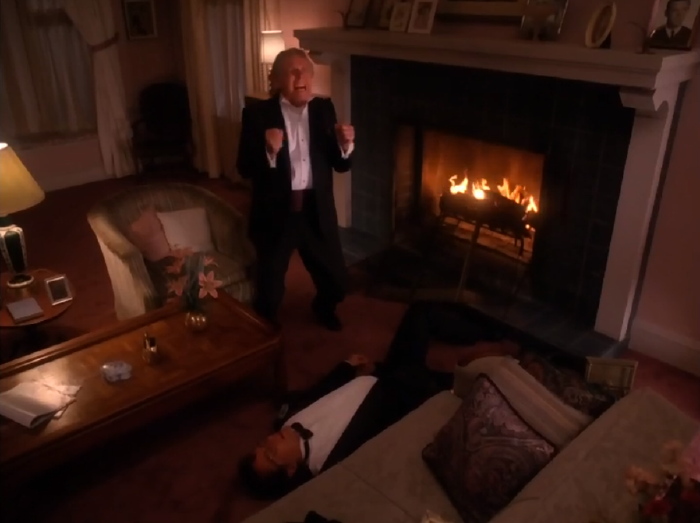 So, that Black Lodge sequence. (If that is indeed the Black Lodge.) This is Lynch, so there’s no cut-and-dry explanation for what goes on there. His main goal is usually to create a feeling. With that in mind, I felt the denizens of the Lodge were a little too… explain-y. On our previous visit there, the Man From Another Place (MFAP) and Dream Laura were perfectly enigmatic, saying things that made the minimum amount of sense required to keep you intrigued. Now you’ve got MFAP helpfully telling Cooper stuff like, “This is the waiting room.” The waiter from the Great Northern disappears and is replaced by the Giant, who says, “One and the same.” The Lodgers are too chatty in general here; it takes away some of their mysterious allure.
Overall, though, the sequence succeeds in feeling like a nightmare. Everything feels as slow as molasses – or whatever is in Cooper’s cup here: 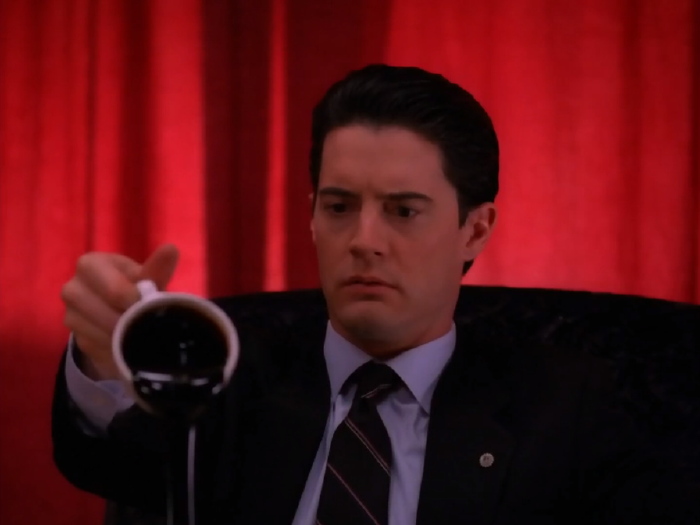 This is in part due to the low-key, discursive jazz on the soundtrack. Environments are fluid. Goings-on seem dictated by the subconscious. Words are repeated. Rooms are repeated. Eventually characters are repeated. (That might be the most puzzling part for me: what’s the deal with the doppelgängers?) Here are my five favourite Black Lodge moments:

1. The blood-curdling backwards screams of Laura’s doppelgänger as she shimmies towards Cooper.
2. BOB taking Earle’s soul. Not only is it my favourite image of the episode, but Kenneth Welsh does his best Peaks acting pantomiming what it would be like to be BOB’s victim. And I think Frank Silva doesn’t get enough credit as BOB; he really makes his extreme role work. 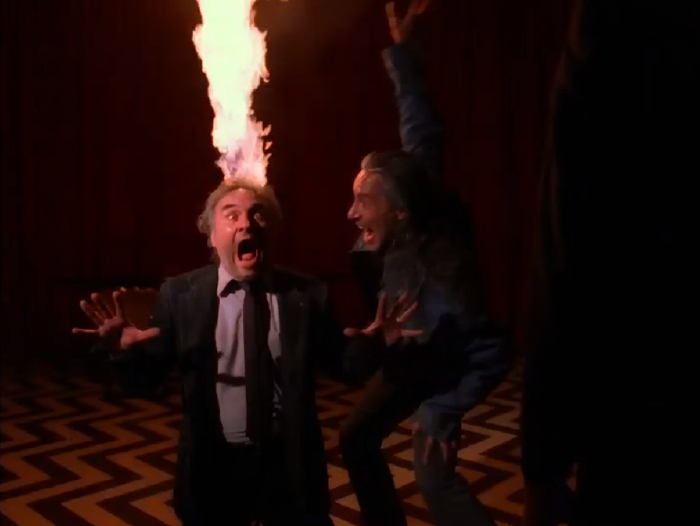 3. Annie sitting up on the floor of the Black Lodge, looking like a lost little doll (pictured at the top of this page).
4. Sarah Palmer creepily channelling in voice-over, “I’m waiting for you,” over a shot of a Black Lodge hallway.
5. Laura making that sculpture-like “Meanwhile” hand gesture. 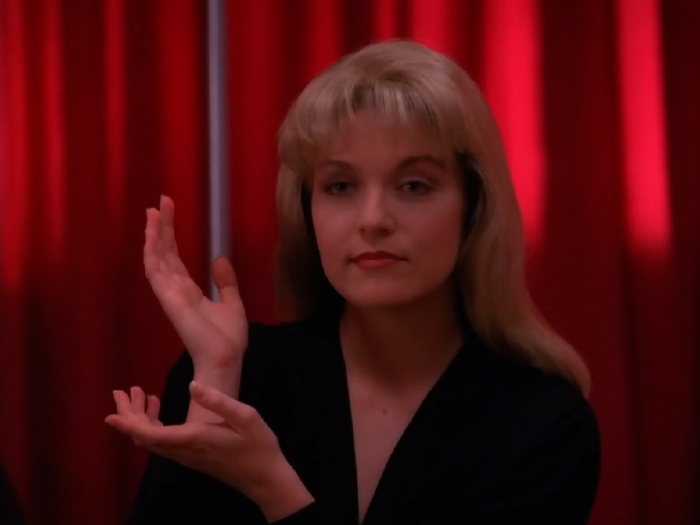 The episode reserves its most chilling moment for the very end. When I first saw it, I assumed that BOB was inhabiting Cooper the same way he had Leland. But it seems to be a different situation – BOB is inhabiting Cooper’s doppelgänger. It makes logical sense – I don’t think it would have been possible for BOB to possess Cooper. But either way, to have such a virtuous character beloved by fans of the show appear to turn into this cackling maniac, is so tragic it feels like a violation. Y’know – in a good way. 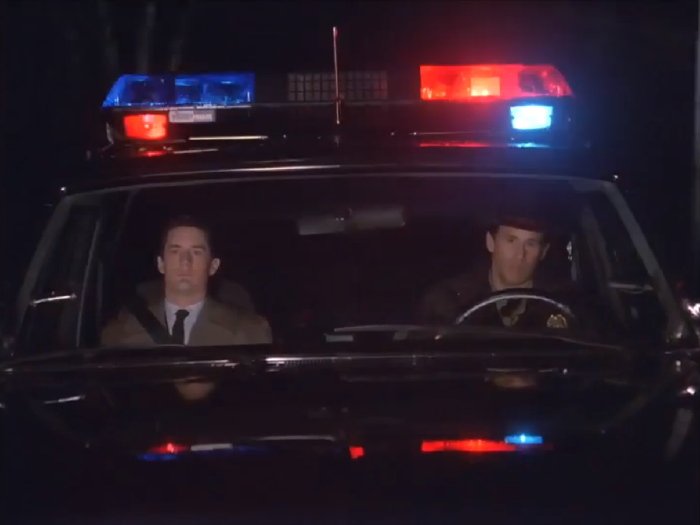 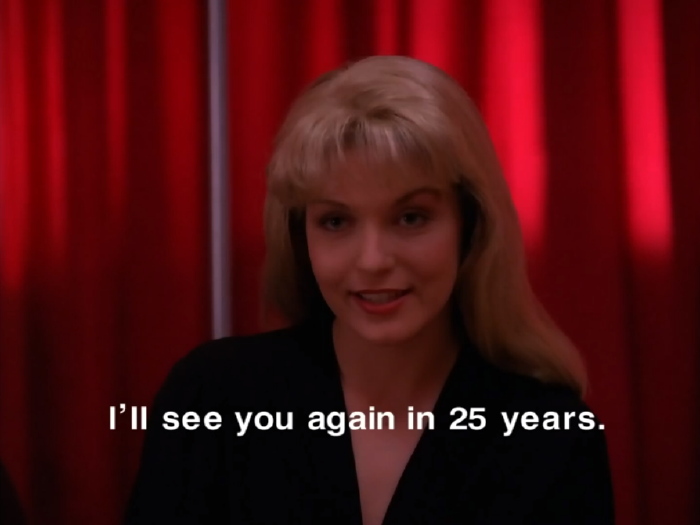