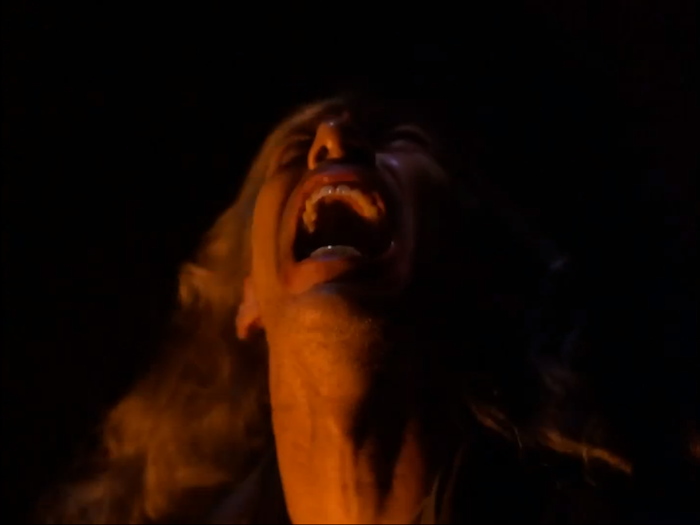 As Agent Cooper lies bleeding on the floor of his hotel room, he is visited by a mystical giant who makes predictions/gives clues. While speaking to Diane, Cooper reveals he had been wearing a kevlar vest, but he had rolled it up to chase a tick. He is rescued by the Sheriff’s department, who bring him up to speed once he regains consciousness in the hospital. Over Doctor Hayward’s objections, he leaves the hospital to continue his work. Audrey successfully wards off her father without him finding out her identity, but she gets in trouble with the madam. Shelley and Pete survived the fire; Catherine is presumed dead. Leo and Nadine are in comas at the hospital. Sarah and Maddy discover that Leland’s hair has turned white. Thanks to one of the giant’s clues, the law gang finds out Leo was in prison when Theresa Banks was murdered, so he isn’t the culprit. Dr. Jacoby says he smelled scorched engine oil the night Jacques was smothered. Shelley and Bobby say “I love you” to each other. Ed reveals he’s responsible for Nadine losing her eye. Major Briggs tells Bobby he had a vision in which he foresaw a wonderful future for his son; Bobby is moved to tears. At the hospital, Ronette thrashes in her bed as she relives that night in the train car, and we see Laura being murdered by Bob, the grey-haired man who’s appeared in Cooper’s dream and Sarah’s visions.

I had a lot of expectations when I tuned in to the second season premiere. One of them was that it would be the same show. It was and it wasn’t. David Lynch was back in the director’s chair, which had my hopes up. And he asserts his presence right from the start. 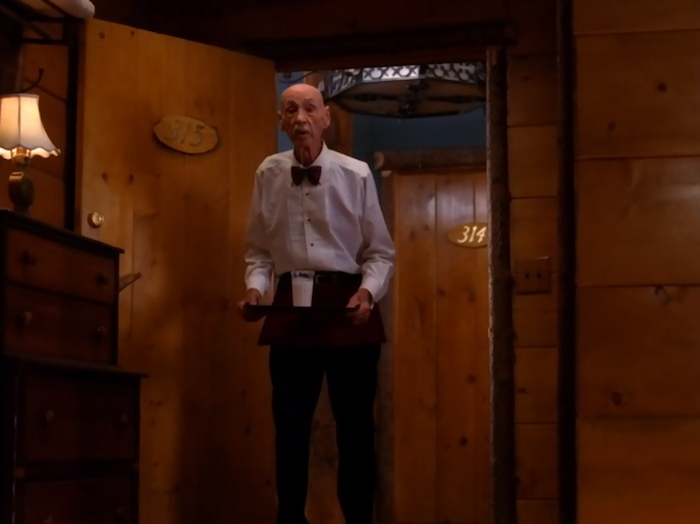 I can’t for the life of me figure out what he was trying to do with that interminable scene with the elderly waiter (from his entrance to his last exit, four minutes and thirty-six seconds pass), but watching it, all I can do is laugh. Cooper is amusingly polite even when he’s bleeding to death. Cooper was Lynch’s baby, the aspect of the show he most fiercely wanted to protect. Watching how the character behaves in this episode, you could swear Lynch gave Kyle MacLachlan a refresher on how to play him. Cooper is more distant and serious here, like he was in the pilot.
In many ways, it’s an episode of changes. Leland’s hair has turned white overnight – a great visual shock. Donna has suddenly become extremely horny for some reason. And this is the episode that gives Bobby a soul. Shelley tells him she loves him (for the first time, based on his stunned reaction), and as he says it back, he seems to realize the truth of the words as they leave his mouth. Later, his dad opens up to him (again, we are made to understand this has never happened before) by sharing a beautiful vision he’s had of his son’s future – and Bobby is moved to tears. 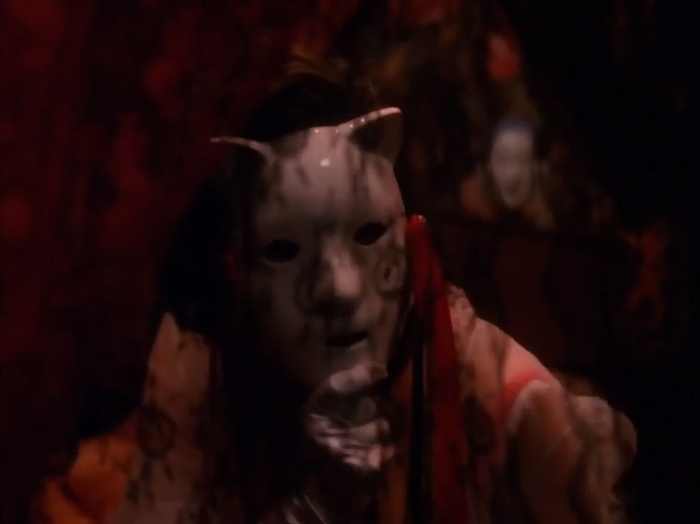 There is a lot of dialogue and a lot of plot in this episode, which makes it a bit harder for Lynch to sustain his signature mood. He still leaves his unmistakable mark on it, though. It occurred to me as I watched Audrey hold that cat mask in front of her face that this episode looks as good as a movie. The dinner scene at the Haywards has a great woozy mood, thanks in part to the hand-held camera work. There’s the absurd comedy of that opening scene and of a recurring joke about toxic hospital food – shots of which are underscored by what I can only describe as the sound of unease. The soundtrack choices are unconventional throughout, for maximum moody effect. Gersten plays discordant notes on the piano while Harriet reads her poem. Every hospital corridor in the last scene has its own unnerving room tone. 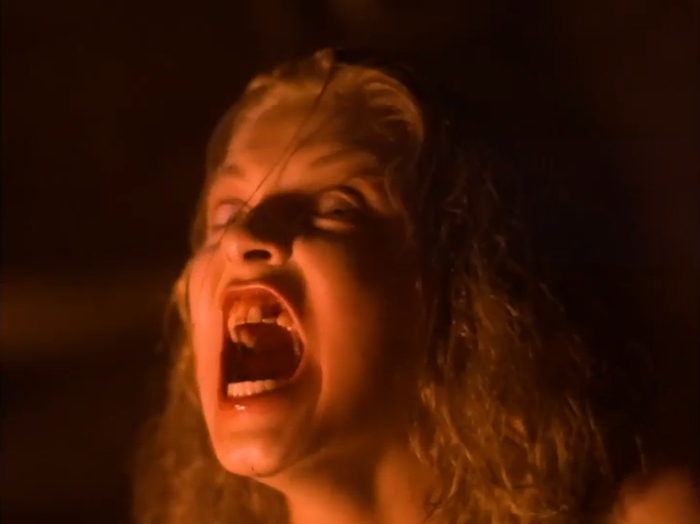 I had mixed feelings about that last scene the first time I saw it. Of course, it chilled me to the bone. It helps that Sheryl Lee is equally good at conveying terror (as Maddy during her carpet vision earlier) as she is at producing blood-curdling screams. But was the show really telling us that this Bob character, whom we’d only seen in dreams and visions, was Laura’s killer? The thought was singularly disappointing. 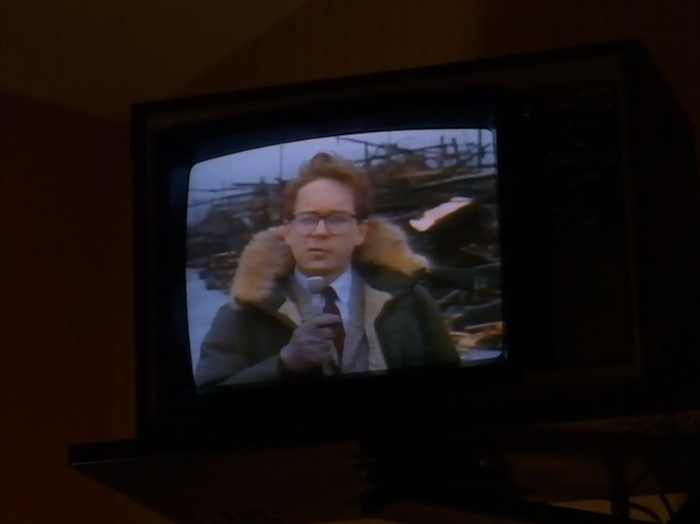 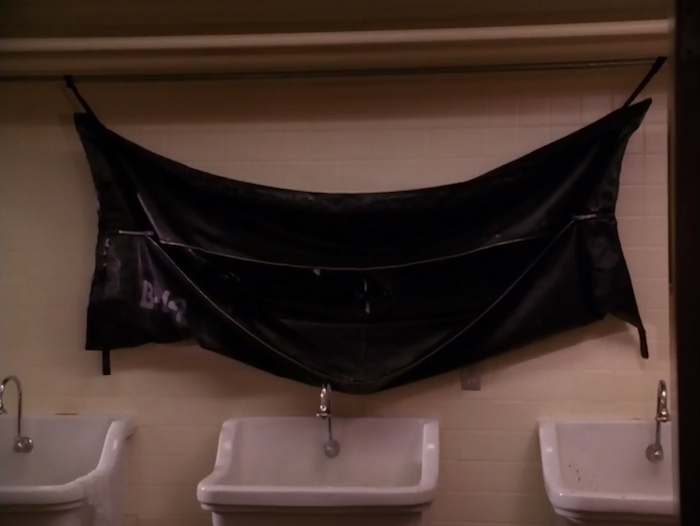 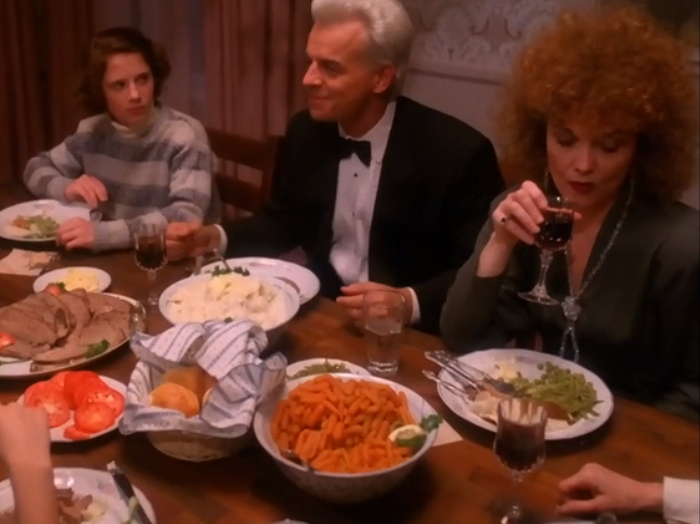